Elegy 20 To His Mistress Going to Bed by John Donne 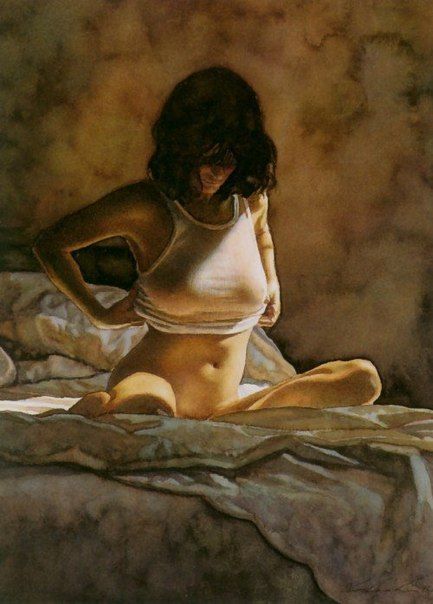 COME, madam, come, all rest my powers defy;
Until I labour, I in labour lie.
The foe ofttimes, having the foe in sight,
Is tired with standing, though he never fight.
Off with that girdle, like heaven’s zone glittering,
But a far fairer world encompassing.
Unpin that spangled breast-plate, which you wear,
That th’ eyes of busy fools may be stopp’d there.
Unlace yourself, for that harmonious chime
Tells me from you that now it is bed-time.
Off with that happy busk, which I envy,
That still can be, and still can stand so nigh.
Your gown going off such beauteous state reveals,
As when from flowery meads th’ hill’s shadow steals.
Off with your wiry coronet, and show
The hairy diadems which on you do grow.
Off with your hose and shoes; then softly tread
In this love’s hallow’d temple, this soft bed.
In such white robes heaven’s angels used to be
Revealed to men; thou, angel, bring’st with thee
A heaven-like Mahomet’s paradise; and though
Ill spirits walk in white, we easily know
By this these angels from an evil sprite;
Those set our hairs, but these our flesh upright.
Licence my roving hands, and let them go
Before, behind, between, above, below.
O, my America, my Newfoundland,
My kingdom, safest when with one man mann’d,
My mine of precious stones, my empery;
How am I blest in thus discovering thee!
To enter in these bonds, is to be free;
Then, where my hand is set, my soul shall be.
Full nakedness! All joys are due to thee;
As souls unbodied, bodies unclothed must be
To taste whole joys. Gems which you women use
Are like Atlanta’s ball cast in men’s views;
That, when a fool’s eye lighteth on a gem,
His earthly soul might court that, not them.
Like pictures, or like books’ gay coverings made
For laymen, are all women thus array’d.
Themselves are only mystic books, which we
—Whom their imputed grace will dignify—
Must see reveal’d. Then, since that I may know,
As liberally as to thy midwife show
Thyself; cast all, yea, this white linen hence;
There is no penance due to innocence:
To teach thee, I am naked first; why then,
What needst thou have more covering than a man?

Donne’s poem is certainly one of the most sensual poems I have ever read; it is also one of the most humorous. The opening lines about “the foe oft having the foe in sight” are as comical as they are suggestive. The rest of the poem follows suit and if you fail to see the innuendo, you are missing the point, and the laugh.

One of Donne’s more religious sonnets has been featured on this blog before under the title, The Fickle Devotion of a Saint. He was also one of the inspirations–along with the biblical book Song of Solomon–for Steven Alexander’s book of poems 14 Lines; an excerpt of which is also available here on Apropoet: Sonnet 28.

Other love poems here on Moss Kingdom: Love is Not All by Edna St. Vincent Millay, Paper Hearts, Les Bijoux by Charles Baudelaire (translated by Jacques LeClercq), A Seduction: in Four Seasons, La Petite Mort: a breath of agony, Sonnet 28 from “14 Lines”, Elegy 20 To His Mistress Going to Bed by John Donne, Non Sum Qualis Eram Bonae Sub Regno Cynarae by Ernest Dowson, Roll On Columbia: a sonnet for our tenth anniversary.