A Balloon and his Friend 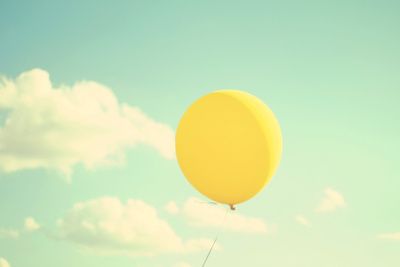 The little girl did not know what he was at first—
the yellow thing that did not drop if you let go.
Still he filled her with so much joy she’d either burst
or grow wings so she could float with him through the air.
He smiled from above while she laughed along below;
a length of ribbon, pink and curled, joined the happy pair.

When do children learn about unhappy ends?
Does the balloon himself know which of the fateful roads
he would choose, if he could, when he must leave his friend?
Would he rather burst, knowing she too will burst with tears
or let life leach away and sag beneath the load
of air that grows heavy with the passing of the year.

Better the tears, he thinks, than to slowly sink that way;
despite the pain, a quick end he would not refuse.
A third path there is, the path where he slips away
from her hand to climb the infinite sky.
Of course he will never really get to choose.
But aye, what an end? To finally, truly, fly.

That dream though is just the way that humans think,
for to a balloon, it is not to fly but fall—
to fall away from all you love and watch it shrink
from view while you grow cold and evermore alone.
If he could choose, would he choose this after all?
Unsure, he but grips the only hand he’s ever known.

This poem was partially inspired by “Everything is Alive: Episode 1” as well as by the lovely checker at our local grocery store who gave my daughter her first balloon.

Other poems from Moss Kingdom on similar topics: A Sea Star Contemplates his Existence in a Tide Pool, The Kite: a villanelle on my fear of falling into the sky