The Deception of Jacob 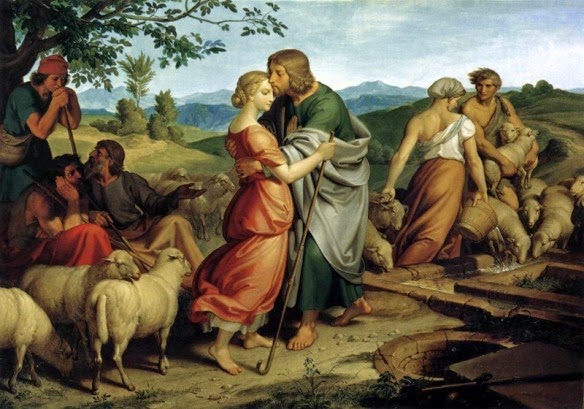 There was hardly time for her to close the door;
but a moment in the darkness passed
before she cast her veil upon the floor
and welcomed him to end his long-held fast.
Then on her breasts she felt his wine-drunk lips
whisper, “Rachel, Rachel my little lamb,”
and as he slumped between her naked hips
breathed, “You my wife and I your husband am.”
She could hear his beating heart slow its pace
but though she laid beside him bone to bone
in the darkness she could not see his face
and through her sleepless night she wept alone
for at the pallid dawn her new husband found
not his Rachel but Leah in his bed.
By her blood and his vows the fool was bound;
this unwanted wife could not be unwed.

How could a father so betray his son?
Seven years he’d labored, his hands had bled
to meet Laban’s price for the treasured one–
then to receive this moaning aunt instead.
Treachery. Treachery. A world of lies.
How could he waste his blessing, all his years
yoked to this cow with weak and watery eyes,
this sniveling sister with traitor’s tears?
Then Jacob full of wrath sought Laban’s tent.
How could you? How could you? You knew the cost.
Yet there he stood unmoved by this lament
and smiling he replied, “Not all is lost
my son. You see custom cannot allow
a father to bless with marriage the younger
before the elder. But you could, by second vow,
secure a second wife to slake your carnal hunger.”
Gritting his teeth, young Jacob knew the draught
he’d had at Leah’s well could never quench his thirst.
Then with a hate he could not hide he laughed
and pledged a second seven to displace the first.

That night, he dreamed of his aging mother
and how they had conspired to deceive
blind Isaac as he sought the favored brother.
And blessings meant for Esau to receive
they stole by substitution in the dark
and kindled fire with that errant spark.
In that night he’d meant his kisses, his caress,
for the youngest, but his hands had found the other.
As his father once had reached his arms to bless
elder Esau but found the younger brother.
Who commands the betrayer be betrayed?
Is this the price that now must be repaid?
Thus Jacob feared he never could atone
if he were forced to reap all he had sown.