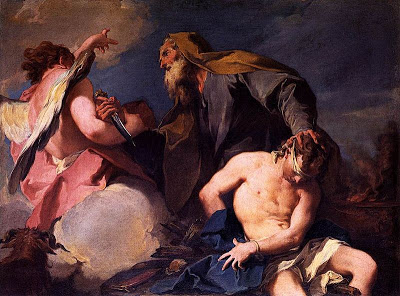 “You must leave your land, your gods. Take flight.“
The Voice was so unyielding, so obscure.
How could he trust that whisper in the night
beckoning the patriarch from his home in Ur?
At the dead end of his doubts he could not—
and perhaps it was only foolishness that drove
this father-of-none to seek another plot
and burn the household relics in the stove.
Still, he followed the Nameless to the Western Sea,
wandered through lands of foreign lips and blade
where locals worshiped under every spreading tree
and—childless—his aging flesh decayed.
So when, at last, his wife produced an heir
his captive thoughts and private dreams were freed.
But how quickly did those joys sour in despair
when the Voice called him to kill the promised seed.
Then as cramped arthritic hands raised the knife to sky
the Voice cried out, “Not this, but a greater son must die.”