A Lament for Michal 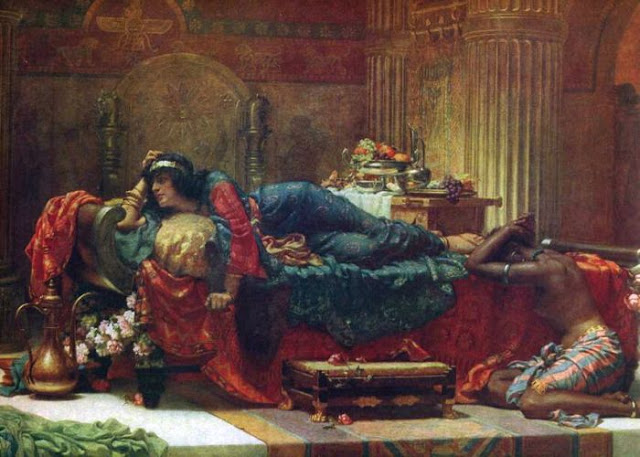 The mistreated Earth in her heartache sings
love songs to Life but shares her bed with Grave.
Hers is a marriage of our making;
our hands pressed her to become another’s slave
just as Michal, the daughter of King Saul,
was given once by will and once by force,
was torn from David, whom she loved more than all,
and was bound to another, as one might sell a horse.
Childless she died, a betrayed madam.
What can be said for these two queens, by men
compelled—she by Saul and Earth by Adam—
into unions that never should have been?
Sit in silence; let ears absorb the sting
of these brides who were stolen from the King.

Forgive me for overburdening this with commentary, but I wanted to add a note for anyone who might be confused by the poem above. I was trying to draw a comparison between the earth’s subjection to death and the forced remarriage of the biblical character Michal to Palti.

The story begins with princess Michal happily married to David,* a servant and general to her father, a godly man who has been secretly chosen by God to replace her father as King of Israel. Although David never acts to betray the King, Saul eyes him with increasing envy and suspicion because of his growing popularity with the people and among the royal household.

Even prior to David’s marriage to the princess, Saul had tried to have him killed by insisting that David kill 100 enemy soldiers before being allowed to marry Michal thinking that David would be killed in the attempt. David doubles the number and returns safely, much to Saul’s dismay. Saul’s hostility toward David does not cease however, and eventually drives him to flee the palace and go into hiding in the wilderness. Michal, in an attempt to aid her husband’s midnight escape, risks her own life in deceiving the King’s assassins and subsequently lying to Saul to ensure David has time to retreat.

It is quite likely that Saul saw through her attempted deception and therefore decided to punish her disloyalty by handing her over to become another man’s wife—a move that was also intended to dispirit David and to weaken his claim to the throne. She was forced into a second marriage, while her first husband was still alive and loved.

Several years later, Saul dies in battle and David assumes leadership over the kingdom. As part of his ascension to power, he demands that his first wife be returned to him. She returns, but not as the same woman who had been taken from him, (perhaps partly due to the fact that David had taken several additional wives in the intervening years).

Unfortunately, Michal is rarely mentioned without referencing her criticism of King David’s enthusiastic and uninhibited dancing before the Lord. While I do not hope to excuse her bitter response, I do want people to see the anguish of her story because she is as much a victim as she is a villain. I can’t help but imagine how different the story would have been if Saul had not chosen to force her into such an impossible situation.

I see the same tragedy and torment in the world today. A world that should belong to the creator God—who is good and loved and full of life—has been forced into an unhappy union with death and the grave.

*Interestingly, Michal is the only woman in the Old Testament who is said to have ‘loved’ a man. This curiosity makes her subsequent story all the more tragic.