The Rape of Tamar and the Half-life of Joy 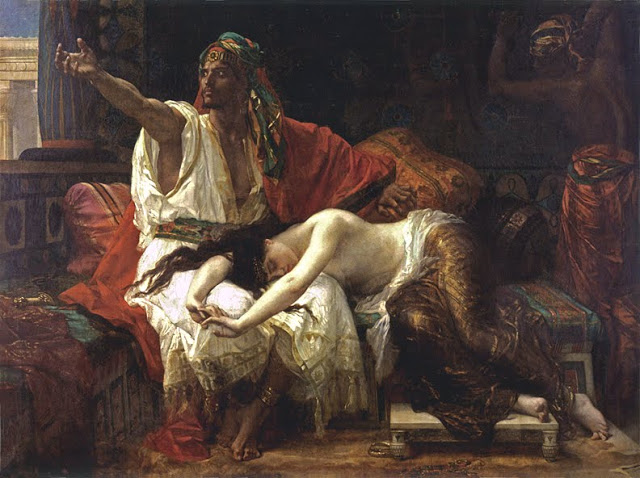 Amnon held his desired to the bed
and, famished, smiled as he ravished the prey.
Then he sickened like a man overfed;
the flesh he sought, consumed, stank of decay.

Absalom smiled too as he avenged the rape.
But even the pleasures of revenge take flight;
once the trap is sprung, other birds escape;
the hunted falls, no more pursuit, no fight.

Even those joys we seek in innocence
suffer from such diminishing returns
for climax is the death of our suspense
and Desire, satisfied, no longer burns.

Mystery survives not a second past
epiphany, and Knowledge is not born
until the full-formed thought is come at last;
their union, for a single instant, is untorn.

Yet that moment, without fail, will end
and happy hungers starve the moment that we dine.
Oh there must be some joy that can transcend
this law, some point that can become a line.

We prize the fire so long as hands are cold,
but soon we find the room has grown too hot.
Slowly, the painted eyes of youth grow old
and see difference between ‘getting’ and ‘got.’

The wise are happiest while being teased
having learned the half-life of human joy.
Trained by the seasons, they are most pleased
when Summer’s wind and Winter’s sun are coy.

The truth and terror, “Nothing gold can stay.”
For once enjoyed, the virgin thrill is lost
and brilliant colors always fade to gray.
Great God! We need a joy we can’t exhaust.

Yes, were we not made for immortal things?
For the climb of mountain crests that never cease,
where every hilltop another summit brings;
the ridge must rise—forever all increase.
Where what we want and what we have in a single moment meet;
something must extend the joy of being complete while incomplete.

The story of Amnon and Tamar and Absalom’s revenge.

Nothing Gold Can Stay by Robert Frost –One of my favorite poems of all time on a similar theme.