The Sleeping Prince of Rails: Or the Curious Death of Webster Wagner 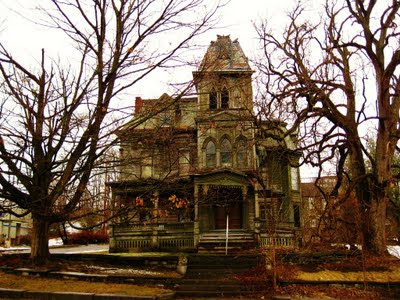 Webster Wagner was born in Palatine
just a stepping stone between Rome and Troy
as you ride the old New York Central line
from Albany straight west to Illinois.
He built quite a home alongside the bridge,
a mansion of the Mohawk Valley ‘tween
the Adirondack and the Catskill ridge;
In its day, it was a sight to be seen.
He’d made his fortune from the sleeping cars
and then, in order to increase the sales,
he equipped the trains with drinking bars.
Would you believe the sleeping Prince of Rails
left his home to return to dust again
when he died in the wreck of his own train?

Thanks to Derek and Holly Rubino who helped me out with Photo Challenge #3;  it was a lot of fun.

Webster Wagner, was a 19th century politician from Palatine Bridge, New York who’d made his money off the invention of the sleeping car for the weary railroad traveler. He also made a good deal of money off the parlor car which sold food and alcohol. Ironically, he died in a train wreck while sleeping in one of his own cars in 1882. Alcohol may or may not have been involved in the accident.

Interesting information on the house and Webster Wagner

Map of Region of New York

Other attempts at humor here on Moss Kingdom: You Violated Right-of-way: a rondel about how I hope you die in a fire., Spider Dream: a Limerick, I Love it When you Call me Khaleesi, Yes, I Was Once Afraid of Bees, Observing an Amish Family at the Gorilla Enclosure, ACROSTICS ‘R’ LAZY, For Michael on His Thirtieth Birthday: a Limerick, Panda Loose in My Brain: a sound experiment in multi-syllabic rhymes, I Did Not Need Malice to Murder, The Sleeping Prince of Rails: Or the Curious Death of Webster Wagner, Then I Was Rechristened Gus