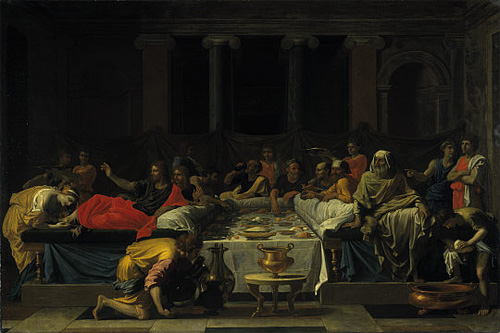 This lazy traveler reclines with dirty feet
and receives his food from unwashed hands.
He sinks his teeth in questionable meat
and questions not this whore with tangled strands
crying to him as if he were a god!
And the whole muddied mob calls him “Teacher!”
Can they not see through this “holy man” facade?
He eats and drinks like a common creature!
If he were a prophet, as they claim,
certainly he would know this carnal beast
and how she sweats our beds with open shame;
he would keep the holy distance of a priest.
We know there is a special kind of flame
reserved for those who so despise the Name.

Now one of the Pharisees invited Jesus to have dinner with him, so he went to the Pharisee’s house and reclined at the table. When a woman who had lived a sinful life in that town learned that Jesus was eating at the Pharisee’s house, she brought an alabaster jar of perfume, and as she stood behind him at his feet weeping, she began to wet his feet with her tears. Then she wiped them with her hair, kissed them and poured perfume on them.

When the Pharisee who had invited him saw this, he said to himself, “If this man were a prophet, he would know who is touching him and what kind of woman she is — that she is a sinner.”

Jesus answered him, “Simon, I have something to tell you.”

“Two men owed money to a certain moneylender. One owed him five hundred denarii, and the other fifty. Neither of them had the money to pay him back, so he canceled the debts of both. Now which of them will love him more?”

Simon replied, “I suppose the one who had the bigger debt canceled.”

“You have judged correctly,” Jesus said.

Then he turned toward the woman and said to Simon, “Do you see this woman? I came into your house. You did not give me any water for my feet, but she wet my feet with her tears and wiped them with her hair. You did not give me a kiss, but this woman, from the time I entered, has not stopped kissing my feet. You did not put oil on my head, but she has poured perfume on my feet. Therefore, I tell you, her many sins have been forgiven — for she loved much. But he who has been forgiven little loves little.”

Then Jesus said to her, “Your sins are forgiven.”

The other guests began to say among themselves, “Who is this who even forgives sins?”

Jesus said to the woman, “Your faith has saved you; go in peace.”